skip to main | skip to sidebar

What a whirlwind! These past few days have been jam-packed with travel as I try to absorb as much of the Île-de-France and its surroundings before I quitter the country in just over two weeks.
Saturday: On Friday night, I took a sleeping pill in hopes of replacing my melatonin which had run out a few days before. Consequently, I woke up at noon on Saturday. Given the short day I was faced with, I decided that it would be the best day for a trip to the Villa Savoye.
The Villa Savoye is a leisure home for the Savoye family designed by Le Corbusier about 45 minutes west of Paris. I had studied this "manifeste de la modernité" a few years ago, and was anxious to see it up close. Needless to say, I was blown away! It is so much cooler than I ever anticipated! I would take it as my summer house...
Afterwards, I wandered around Poissy for a bit, ended up at a café, where I got a croque-monsieur or a slate slab, and the caught the train back to Paris. The RER (Réseau Express Régional) is a series of trains that extend the Paris subway network way out into the suburbs. The closest RER stop to Neuilly is in La Défense, the economic center of the Île-de-France, thus, this is where I disembarked.
I decided to take advantage of the gorgeous weather and walked down the esplanade at La Défense which was full of people: tourists, parents and children, old women admiring the flowering trees.
Between Neuilly and La Défense, there are two islands: l'île de la Grande Jatte and l'île de Puteaux. My favorite artistic movement is pointillism, and my favorite painting is Un dimanche après-midi à l'Île de la Grande Jatte (Sunday afternoon on the Island of the Grande Jatte). So, being so close, I decided to hit up la Grande Jatte. The island was beautiful and had gorgeous panoramic views of Puteaux and Neuilly. Advice if you are visiting islands in the Seine: make sure you are looking at a map. I didn't realize until I reached the end of the island that I had gone to the wrong island... oh well!
My meandering led me to the Bois de Bologne, an absolutely massive park that marks the southern edge of Neuilly and the western edge of Paris. It was really quite peaceful and relaxing. After about an hour of wandering, I decided to call it a day, and retired for the evening. 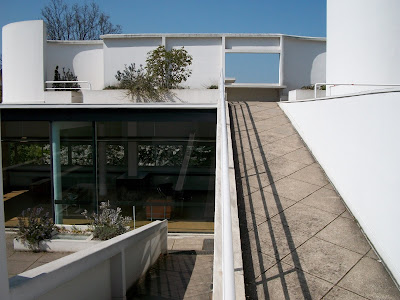 Sunday: Because of the volcano in Iceland and the strike of the French train workers, the majority of NYU students had to abandon the beginning of their Spring Break plans. So on Sunday, I was accompanied to Vaux-le-Vicomte by Grace, Michel, and Cáit.
Vaux-le-Vicomte lies about 45 minutes south-east of Paris outside the town of Melun. Upon arriving in Melun, we were faced with a tricky decision: walk 1 hour and 45 minutes to the château, or take a hack (a taxi that is not affiliated with any cab company). We decided to take the faster route after reasoning that the four of us could take on one sketchy cab driver ... if it came to that!
The château itself was phenomenal. Quick history lesson: Vaux-le-Vicomte was built by Nicolas Fouquet, Louis XIV's first Financial Minister. There must have been something in the water at that time, because Fouquet had grand ideas about what he would become and felt that his château needed to match his ambition. So he assembled André Le Notre, Charles Le Brun, and Louis Le Vau to design and execute the greatest château to date. Working under the "Sun King," Fouquet intended the château to flatter Louis XIV, and thus, during the inauguration party in 1661, Fouquet spared no expense! I mean, he really pimped that party out! Jean-Baptiste Colbert, a junior minister close to the king, convinced Louis XIV that 1) Vaux threatened his new found authority and 2) could not have been paid for unless Fouquet had been stealing funds from the crown to finance the project. Soon afterwards, Fouquet was arrested, his wife exiled, and Colbert made Finance Minister. The king then took Le Notre, Le Brun, and Le Vau to create Versailles. Thus, Vaux-le-Vicomte functions as the pre-cursor to Versailles.
After a very interesting tour, my compadres headed out to the gardens to enjoy the sun while I headed to the private apartments and, eventually, the dome. If I had to buy another summer house to supplement the Villa Savoye, it would be Vaux.
Afterwards, I met up with the three amigos and we wandered around the gardens together. We caught the château-bus back to the train station, took the RER back to Paris, and went to McDonald's. Yum! 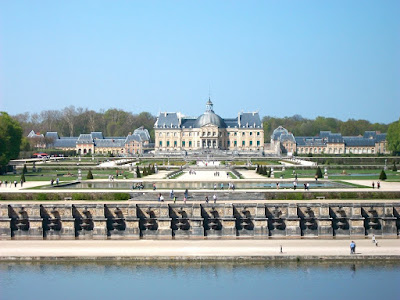 Monday: The next day, I headed to Chartres, a town about 60 miles south-west of Paris. Gorgeous. No if's, and's or but's about it! It was absolutely picturesque! The medieval part of the city is center around the cathedral (naturally) which is a spectacular example of the French Gothic. It may be my favorite church that I have ever visited!
Words really can't summarize how beautiful the town was, so I recommend traveling over to Facebook and taking a look at my photos there!
On the way back to Paris, I struggled to stay awake. Hardcore, New-York-speed, walking for three days can really tire someone out! 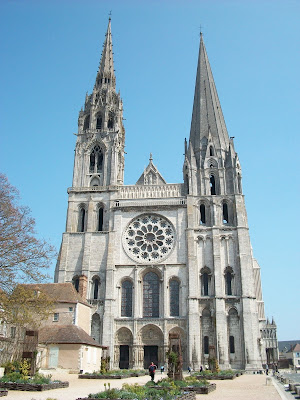 Tuesday: Yesterday, I headed to Reims, a city about 80 miles east of Paris. Upon the trains arrival at the station, I stood up and say three girls from the NYU program on my car! Not only were we on the same train, but we were in the same car! Very strange.
After heading to the tourism office, we headed in the direction of the Tattinger champagne cellars. We got lunch outside of the old Jesuit University and then parted ways: I wanted to explore the city. To make a long story short, I got stuck walking along the river for about an hour and got sunburt! However, I must say that the Rémois really know how to grow a good flower! All the parks were just jam-packed with flowers!
My final stop was the cathedral, which I had written a paper on back in my Medieval Architecture class. The stain glass was just stunning. I sat in the north arm of the transept for about 45 minutes and stared at the windows on of the south arm of the transept. Never have I seen windows so beautiful as these! 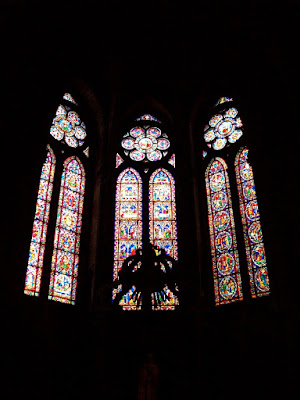 Ok, enough writing. To sum, I went home, went to dinner with Patrick, spent yesterday getting ready for Luke to come, and now I'm writing. Phew. I'm tired!
-Dave
Posted by dlg322 at 7:39 AM